i survived my first in-store signing…

the management assured me that i did a great job.

they had ordered 31 copies, and when i was walking out, they had three left, sitting on the shelf. i think they had a couple hiding in back (but there was only seven at the end of the day, anyway. some of the stuff might have sold from the people that were thinking about it and wandering the store browsing!)

We had to scramble and scrounge a bit to make sure my little table was stocked with enough books twice. TWICE!

And, I seriously have to thank the wonderful staff of Borders Books on Hulen and I-30, and the manager, Lee Cocheneur, for a fantastic first-ever signing. They gave me Seattle’s Best Coffee. They had a really nice table set up for me. They let me borrow an easel when I discovered mine was missing a piece (which I later found in my apartment…).

I’ll have pictures up, as soon as my parents send them to me.

The weather was terrible, and I’m so proud of my friends and family for coming out in spite of the storm. Thank you everyone!

HEY! I’d like to thank Justin and Leah, who apparently found out about the event from this little blog. I had the great pleasure of meeting them in person.

That was my first bookstore signing, and I have to say that it was great fun, and I’m still very hopped up about it.

And now, I drink a little alcohol… because I earned a beer.

Sunday, I’ll be doing a reading and signing at Eurotazza Cafe on Camp Bowie in Fort Worth. (www.eurotazza.com)

Oh, and last but not least, here’s a picture of the lovely and talented Adrienne Kress using her mystical powers to read my book backwards. (Some people really work too hard to know the ending first. Seriously.) 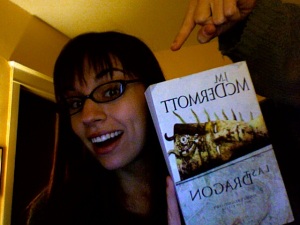 7 responses to “i survived my first in-store signing…”