My Sister’s Cats Had A Trip to the Vet 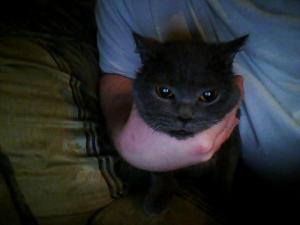 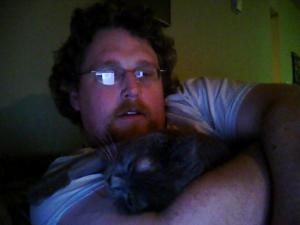 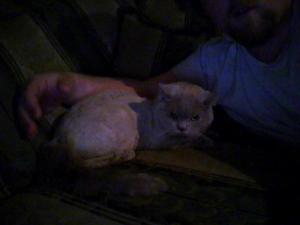 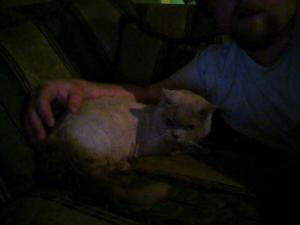 After some surgery, the cats are doing fine. Nothing too serious. But, one thing was Massimo had to get his butt shaved to clear out all the matted tangles in his fur. He looks like a poodle.

Diva is not a fan of having her picture taken. “Me iz not redy fr closeup!”

There will be pictures of a shaved cat, soon.

At the moment, however, I have to go attend to cats and cat-like affairs.

But, tomorrow, there will be shaved cat pictures, and everybody loves a shaved cat.

Two consenting adults decide they want to be the ones to define their lives, in a manner that causes absolutely no harm to any other living being on the planet, and to make their families in their own way and on their own terms.

However, because some folks’ religions do not believe that what those consenting adults are trying to do is in accord with some holy books, some folks vote overwhelmingly to stop it. The people they just stopped are *not* members of the church. Thus the community has imposed a religious viewpoint upon another community with no unifying religion to speak of.

Thus, something that causes no harm to others is illegal. People are not permitted to create the defining terms of their own lives.

In Mesquite, TX, it is illegal for children to have silly haircuts.

Adults should be allowed to define silliness for themselves.

The New Year is coming soon. Will this be the year where gay, lesbian, bisexual, and transgendered couples are permitted to give their children silly haircuts in Mesquite, TX?

I’ve been plugging and chugging hard on a very difficult short story for me to write, and I think I got it and I think it will get sent out soon. However, the problem I had with writing it, and a difficult thing to write, is the moment when a character realizes something without any predicated stuff. The realization rises out of the subconscious, and changes the course of the plot.

I refer to them as “Araby” problems. In James Joyce’s short story, “Araby” the main character has his climactic epiphany in the shop, holding the object that he intends to give to his young crush. He realizes, in a flash, that buying the object, and giving it to the girl will do nothing for his chances with the girl. He puts the object back and goes home.

It works in Joyce.

Science Fiction/Fantasy/Horror is not a place where internal monologue is welcome. Inner looks upon the gears of the character’s mind are not nearly as much fun as, for instance, betrayals in a multi-versal battle at the end of time.

Generally, it is better to write an action that is unexpected followed by a character reveling (or hating) the results.

Sometimes, stories come along that do not have that possibility, and you face an “araby” problem. Then, you have to find some way to sell the audience on a sudden and unexpected revelation.

One “Araby” problem is quite enough to make for a difficult story. This particular story I have been wrestling, alas, has more than one of those difficult moments.

We’ll see how successful I am.

Whatever happened to gold stars?

Remember when you were a kid, and you did good, and you got a big gold star on the bulletin board? That was awesome.

You know what the internet needs? A gigantic bulletin board, with everyone’s name on it. Then, when you do something good, someone gives you a gold star. Shiny, and golden and happy and fun.

A big, giant bulletin board, with everyone’s name on it. And gold stars.

My Mom Got a Wii…

I’ve wanted a Wii for a while. However, since I’ve also been wanting to be a writer of fictions, I avoided temptation to pick one up. For Christmas, my Mom picked up a Wii for herself.

Here’s the genius behind Wii. My Mom can pick up the console because she wants to play Wii Bowling, and shoot at stuff with Link’s Crossbow Training (…to her, she just wanted something to squeal when it dies. It didn’t matter if it is a Skeleton-faced Monster, or a Deer, or Anything, as long as she gets to shoot something and hear it die. I totally agree with Mom on that one. Shooting targets is not as rewarding as shooting the hobgoblin thingums that keel over squealing.)

Wii is brilliant because it acquired the attention of a casual gamer, like my Mom, who never really wants to spend more than a few minutes at any one game.

Because of this, my Mom also picked up Force Unleashed, not a casual game, because she wants me to have something fun to play, too, when I’m over there. I am a dedicated gamer, who would blow all of his life playing video games if I had less self-control.

In short, Wii console designers are brilliant. By embracing more than just the hardcore gamers (I’m looking at you PS3), the company will expand it’s marketshare and expand the number of hardcore games that sell, as well, since more households will have Wiis.

The Force Unleashed is fun, too. It isn’t the perfect lightsabre game, however, being able to actually, physically swing the Wii control increases my pleasure when slaughtering my enemies with my lightsaber.

Merry Christmas! Have some alien conspiracy theory while I’m busy hitting the egg-nog!

I know you woke up early, jumping on your family members’ beds to rush downstairs and shout “It’s Christmas! Let’s check J M McDermott’s blog to unwrap what he has given us!”

I have, for your perusal, an interesting alien conspiracy I encountered somewhere on the web.

Merry Christmas! Peace on Earth! Goodwill towards all Living things, and ghosts.

I watched a lot of movies this year. Almost none of them were in theaters. Most of them were courtesy of the library. At the library, new and recent releases are often watched within an inch of their existance. And, to be perfectly honest, the words “Criterion Collection” really are synonymous with “You are about to see a brilliant movie that will blow you away!”

My favorites this year, watched this year though certainly not made recently, are as follows:

Right, so you know how when you see nifty, kitschy chess sets, like a Star Trek chess set where Kirk stares down the evil Klingon Empire, or Gandalf faces off against Mordor, or Autobots take on the Deceptacons?

In chess, white is evil. White moves first. White is the aggressor.

What I want for Christmas.

I want this more than little girls want ponies.

(I’ll probably be staring at this chess set, drooling, for, like, hours.)