The Coolest Thing This Week

Fans are awesome. That’s all you can say when you encounter this story.

Graf. It was made up in a book by an author. Homebrewers thought it sounded good and made it.

is a strong hard cider or apple-based beer widely consumed in In-World. The specifics of the beverage are not mentioned (except to say that some varieties of graf are weak while others are eye-wateringly strong).
Modern homebrew aficionados have created a huge variety of graf recipes (usually calling it “graff”), originally inspired by the Dark Tower series (as there is no known historical beverage called ‘graf’). They share in common the idea that graf is a malted, slightly hopped cider however many recipes also add a number of spices and/or adjunct fruits. Some recipes have a relatively small malt contribution (being almost entirely cider) while others could be described more as apple beer (with large amounts of malt and only a small amount of apple).
Graf is said to taste tart, light and refreshing with a deceptively high alcohol content.

Stephen King invented a drink for his fantasy world, and people are making it based on the description.

Homebrewer “Brandon O” seems to have created the grandfather of the many variations that exist, now.

Hell, I’m not going to explain it. Here’s a video.

A beverage that sounds amazing in a book, made by people, and now the idea has taken on a life of its own i the world, as people brew and create and it won’t be long before someone is selling this stuff and making a living at it.

Is it any wonder operating on the boundaries of things, where speculation and life happens, is an addictive thing that makes me excited to get to work today.

Also, regarding the beverage of choice in the Dogsland novels, please do not anyone invent “Piss Gin” because I would really prefer not to be the person who gets blamed for that. (Khali would be neat, though.)

I enjoy following politics, because it is a bloodless, pseudo-intellectual version of professional wrestling. I don’t think the real issues that matter the most for the survival of this species on earth are going to be impacted in the slightest by whether the blue team or the red team win the race to the top of the mountain wherein they plant their flag until the next round.

You see, there is a revolving door between big business and government regulation. The polar ice caps are melting, and will probably be gone in 5-10 years. The GMO crops are taking off, despite all the warning bells and health issues that result. The sickness of our population rises with our wealth, and in turn sickens the earth around us.

The polar ice caps are almost gone. It’s sort of moot whether we expand drilling or contract it if we are still pouring oil from somewhere into the mouths of engines. Fracking is happening. Mountains are being torn apart for coal. Nuclear power plants are being built on fault lines and in areas prone to natural disasters while no one really knows what to do with the spent fuel rods.

I like watching politics. It sort of soothes me to see all this serious and high-minded debate about issues. It’s a way to distract myself from the terror of knowing how futile our democracy has been at solving the problems of our generation instead of the problems of the middle ages. The separation of corporation and state is an issue for us, not the separation of church and state. (Corporations aren’t evil, mind you, but they are capable of doing evil things when corrupted by access to political power.) Rethinking our urban and suburban and rural infrastructure to support a radical alteration in our sustainability matters. (Urban farms are good; a solar panel and windmill on every building, and re-jiggering our energy and water usage towards a sustainable level could radically shift our nation away from pollution, but you know, politics and the status quo bias and we all love our cars, etc….)

If a political system cannot save you in a time of global crisis, what use is that system?

I recently signed on with Weightless Books, and one could now purchase WOMEN AND MONSTERS or DEATH MASK AND EULOGY from them, and instead of feeding the Amazon, you could be feeding Small Beer Press.

They have a lot of interesting titles, too.

Poke around and see what you can find for your preferred e-reading device!

We are wed. We are moved. We are gently settling in. Life is wonderful.

In other news, annoyed by a book, I put it down for good and picked up Cloud Atlas, instead, to re-read the hefty tome before the film arrives to ruin the dream of the book in the mind with actors and screenwriting and whatnot. Annoyed by this other book, though, I searched my brain for why it bothered me so.

It was the sort of book that gets reviewed in important mainstream magazines, and it was well-written, and it wasn’t anything but personal preference for why it bothered me, so take all of this not so much as a manifesto or angry yowl or anything of the sort, but as a sort of exploration of what bugs me sometimes in some books. As one might suppose, there is a strong preference that I have in my fictional writing and reading for the non-real. In general, but not always, I prefer books that do not engage with reality as we understand it, but instead integrate the unreal, the speculative, etc., or at least presume an awareness of the mysteries of this world that are beyond the known.

I was thinking about this because I am actually working on something (not a book or work of fiction, etc.) that is strictly realist, involving murders and the solving of murders. The thing that bugs me is that there is no possibility of the unreal in the text.

But, the thing I think about reality is that we do not grasp it. We only think we grasp it. When we say “reality” what we’re actually saying is “consensus reality” and that is not the same. This is the sort of thing that self-help gurus like to exploit to encourage people to change their lives, and the thing that scientists explore, and the thing that religion exists to explicate occasionally: we do not truly know what is real.

In the realistic fictions, ones that leave no opening for a sense of mystery, ones obsessed with recreating the world that is for the page, there is a limitation to what is possible, and an artificial construct of a reality that reflects the consensus back upon the lulled mind. The magic thing about reading weird fiction is that consensus reality is challenged, pushed, and occasionally broken. Also, reality is a shifty thing that moves with measurements and moves with time and belief and understanding. Fiction of the experimental and mysterious pushes the goal posts, just a little bit, to move the boundaries of consensus reality outward, and prime the mind for what strangeness will come when we know more, grow more, and reach out beyond the perceived limitations of the flesh, and of the systems of this world that seem so immutable.

Realistic fiction is a fine thing, but the stories of this genre I enjoy the most often do not particularly obsess over consensus reality, and leaves room for the impact points between the known, the known unknown, and the unknown unknown.

Soundbyte hunting? Well, here is one for you: Realistic fiction is actually consensus reality fiction. There. Flame me, if you must for saying it, but keep me out of the genre versus literature, because this is definitely not part of that debate. There are plenty of wondrous literary tomes that qualify to my evolving understanding of what I really look for in a text, including things like Wuthering Heights which has such lovely, mysteriousness in the explorations of dark, destructive, healing loves.

My weekend was pretty great, actually, thanks for asking! 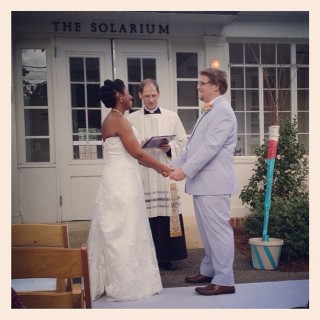 I’m on the right.