FOOD AND DRINK IN DOGSLAND: Take us home, to the woods and hills north of the city. We Leave Together is here, and so is an appropriate beer.

If you’ve been brewing these at home, and planning to do a beer and book pairing wherein you drink the beer while reading (or rereading) the books, I commend you.

The concluding piece of the trilogy, where everything falls apart, needs a beer worthy of falling apart, capturing the heat and power and broken places of Dogsland, where alcohol is likely a major cause of death.

I have mentioned in prior communications that Steam Beer, a.k.a. California Common, is truly the beer of the city. Begun in San Francisco, during the gold rush, a flood of thirsty miners were looking for cheap beer, and lots of it. The brewers were often German immigrants, attempting to adjust their native techniques to the challenging conditions of San Francisco. You see, the lager yeasts they had were bred for much colder fermentation temperatures than were possible in San Francisco in the 1860s. There simply wasn’t any way to ferment cold. The best they managed was to ferment in big, open tanks that were very flat to create a wide surface area for fermentation, put up on roofs where the wind was cool above the brewery.

This beer was not famous for tasting good for a long time. It was cheap beer, pumped with whatever adjuncts were handy, overhopped to mask off-flavors, and served as soon as the alcohol was in the keg, no aging or lagering or improvement necessary.

This is a street beer for hard-drinking, violent people, in a port town full of every vice available to man. California Common beer has evolved a little since its rough origin, but not so much that it has lost it’s rough edges. At heart, it’s a street beer, intended for fast and furious intoxication.

Dogsland is a harder street to swallow. Let’s go ahead and make it an IPA of a Steam Beer, with alcohol and hops kicked up to the level of a IPA on the backbone of a Steam Beer. It will keep a while, as a result. It will be waiting in the back pantry, for that red night when everything is red in this world.

It’s exactly what Jona would drink while he is trying to make sense of what is happening between him and his beloved, and he is trying to make sense of the hard decisions he has to make. It is exactly what Djoss would drink, because it’s color is nearly pink, and reminds him of his desired intoxicant. It is exactly what Calipari would be sipping on in the wee hours, staring into the glass and wondering if there’s enough money in his pocket to get drunk enough to forget everything he has seen.

This is a single infusion mash, at 152-153 for an hour. Mash out at 168, and get up to a boil.
Minty and Piney Northern Brewer hops will be divided into four additions.

Cool the wort down to about 60 degrees, then add a healthy, large dose of lager yeast. (If you don’t make a starter, use 2 packets. If you do make a starter, think 2 quarts? Somewhere around that.)

Ferment at hot ale temperatures, around 68-72 degrees. After two weeks, transfer to secondary and let it sit another two weeks at room temperature in a new bucket.

From there, bottle it with about 4.25 ounces of regular sugar per 5 gallons. It will come out just fine. 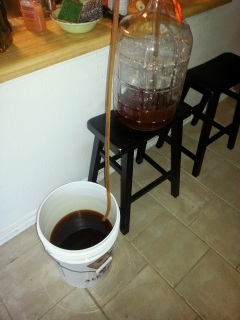 Lemme see if I can find a picture of the brew itself, in my hand…